Jo Churchill was brought up in East Anglia and has lived in Suffolk since 2014.

She spent the first ten years of her career working in retail for both regional, national and global companies, which led Jo into site development and the building industry. Since 1994, Jo has run two highly successful contracting companies specialising in scaffolding in the heritage sector.

Jo served as a County Councillor and was a member of the County’s Health and Wellbeing Board in addition to an executive position with responsibility for the environment and economic development.

In May 2015 she was elected the Conservative Member of Parliament for Bury St Edmunds, the first female MP for the seat.

In September 2016, Jo was appointed Parliamentary Private Secretary (PPS) for Defence, before becoming PPS to the Rt Hon Jeremy Hunt MP, Secretary of State for Health in 2017.

On 7 November, it was announced that Clare, Brantham, and Hintlesham and Chattisham have scooped the honours in this year’s Suffolk’s Most Active Community Awards. 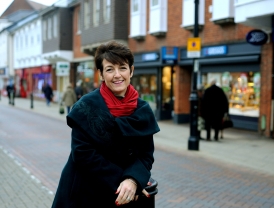