Wear your White Ribbon with pride to stamp out domestic abuse 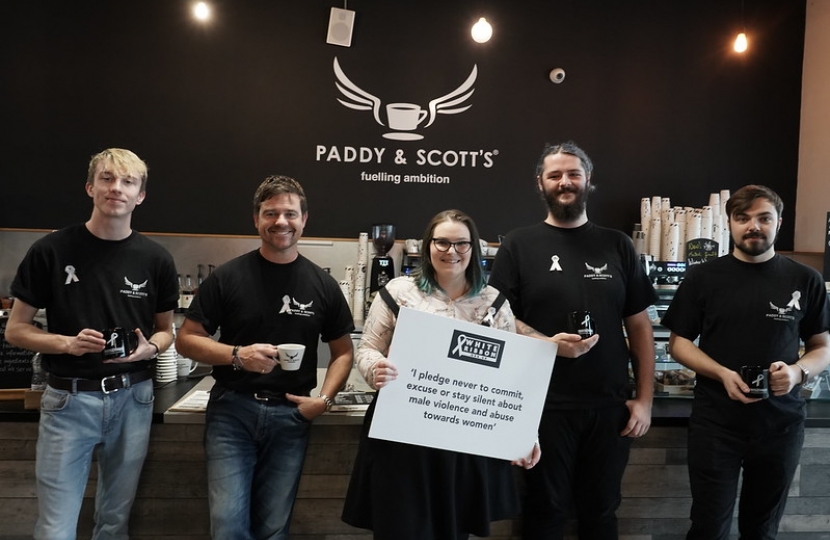 By wearing a white ribbon, supporters can make it clear that domestic violence and abuse against women should never be condoned. The campaign also encourages men to take a share of the responsibility in putting an end to abuse.

Paddy and Scott’s Coffee has teamed up with a range of partners including Suffolk Constabulary, and Suffolk County Council to support this year’s campaign.

Reporting domestic violence and abuse incidents to Suffolk police has increased over several years with more than 10,000 reports of domestic abuse over the past 12 months.

Two women in England and Wales are killed by a partner or ex-partner every week and 70% of domestic abuse incidents result in injury. Nationally, every minute police in the UK receive a domestic assistance call – yet only 35% of domestic violence incidents are reported to the police.

On average, a woman is assaulted 35 times before her first call to the police.

"White Ribbon is an opportunity to work with other organisations, to raise awareness of domestic abuse and violence, sending a strong message that it will never be tolerated.

"We know that dealing effectively with domestic abuse requires concerted multi-agency working and I am proud to say that lots of excellent work is already being done in this area, making a difference to help keep victims and their families safer.

"Anybody can be affected by domestic abuse and we do not underestimate how difficult it can be for people to speak out about being a victim. You are not alone – help is a phone call away.”

People can join the national social media campaign #makethepromise throughout the 16 days of action.