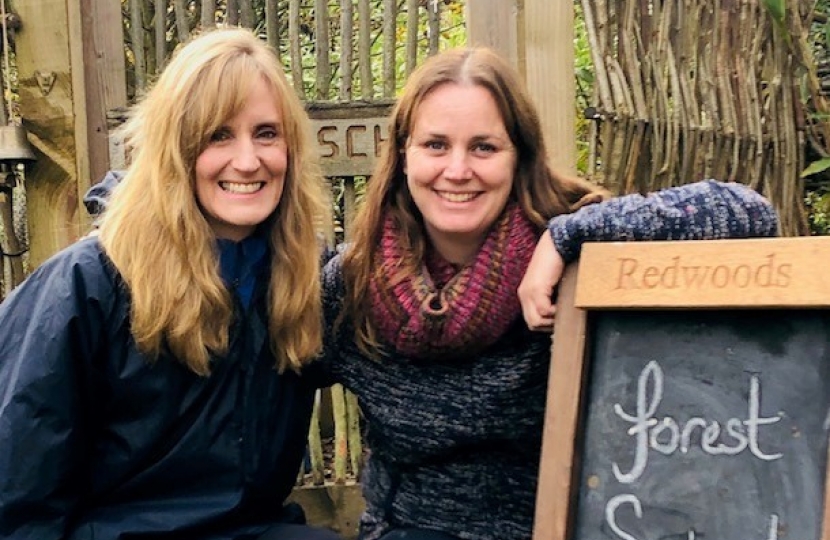 Hidden deep in Nowton Park is a rather special preschool. The only clue to Redwoods Forest Preschool’s location is a carved wooden sign saying ‘forest school’ – and that is just how managing director Christine Oliver prefers it.

Behind that gate is a muddy haven for children. Since it opened in 2017, children aged two-and-a-half to five attending Redwoods have been experiencing an ‘outdoor preschool of the highest quality’, according to Ofsted.

It is the brainchild of former childminder Christine. After living on a farm for many years, she was intrigued by the forest school idea and the concept of education in a natural environment.

When a Bury St Edmunds childminding group she was a part of was offered a healthy living grant, she suggested running an outdoors-based toddler group. The grant enabled her to undertake forest school training and to run the group for two years.

“As a result of that group, I got this idea to make it into an Ofsted registered setting,” said Christine.

Keen to provide a preschool with an abundance of hands-on experiences and opportunities to explore the natural world, Christine needed to find a suitable location.

Luckily, Christine had developed good relationships with Nowton Park’s rangers while running the toddler group. When she told them about her preschool dream and the search for a piece of land which could be fenced off, they told her ‘there’s this area which might be suitable’.

Redwoods is Suffolk’s first fully outdoor preschool, based on the premise nature is the best classroom.

Most sessions involve an adventure out in Nowton Park, while base camp is a secure space where ‘children can relax’. A campfire is lit there, used not only for warmth but for preparing healthy snacks.

Activities are planned around individual needs and interests, while during every session there is circle time, with singing, story and a chat.

One of the striking things about Redwoods is how calm and peaceful it feels, unlike the noise and bustle you might expect at a preschool. This could be particularly beneficial for children with sensory issues, said Christine.

Like other preschools, Redwoods follows the Early Years Foundation Stage (EYFS) framework set out by Government.

However, unlike some settings it runs much lower ratios of children to staff than the official recommendations, to allow for closer supervision.

There are no conventional toys or props at Redwoods, encouraging children to use whatever they find to stimulate creative play.

The school endeavours to go ahead whatever the weather, however it does have to abandon an average of two sessions a year, usually due to gale force winds or snow.

Meanwhile, plans are in place for a new outdoor winter structure to replace the ageing teepee, with fund-raising and grant applications under way.

The new temporary structure would have a door and two windows, with a log burner to provide a warm and dry space for winter months.

Suffolk County Councillor Karen Soons visited Redwoods for an insight into the forest school, but soon found herself roped into pushing a wheelbarrow around base camp during some creative play.

She said: “Forest schools build resilience and confidence and encourage children to keep active as they grow up.

“Seeing this is a delight. I’d like to see this model running in other schools. Getting dirty and playing within a natural environment can only be a positive.”

For more information, go to www.suffolkforestpreschool.co.uk

Redwoods will launch a Forest Fun Club club in January 2020, on Fridays from 4.30pm, for six-12 year-olds. Campfire cooking, play and forest skills will be on offer.