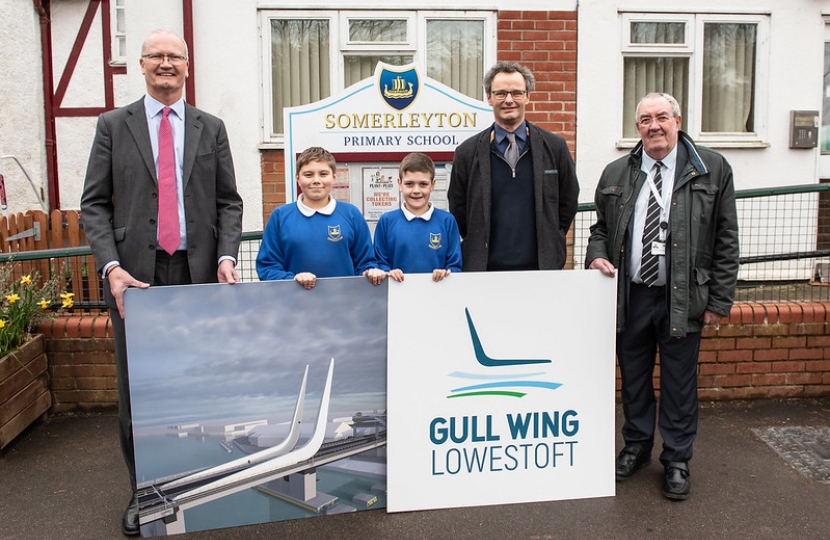 The bridge will be Suffolk’s most significant infrastructure development in recent memory and one of its most visually iconic. It sits alongside several integral projects to transform Lowestoft in the coming years, showing that the area is well and truly open for business.

With no unforeseen delays, construction work is planned to begin in Spring 2021, with a target of Summer 2023 for the Gull Wing to officially open.

“I’ve looked forward to this day for a long time, and with the full backing of my Cabinet, we can now get this bridge built for Lowestoft and for Suffolk.

“But most excitingly, what an occasion for the children from Somerleyton Primary School who have given the bridge its name! I think it’s perfect and they should feel extremely proud. Thank you to all the local children who gave us 22 imaginative ideas to consider.

“It was important for me that the local community was involved with the project right from the start. This is a theme which will continue during the construction of the bridge, and throughout its life, as it will provide apprenticeships and jobs.

“There will also be opportunities for schools and students to visit the site and meet our teams. I hope that younger generations will be inspired by the stunning engineering and learn about the bridge’s positive impacts on Lowestoft and Suffolk.”

“The children wanted to come up with a name which reflected living by the seaside, but they also thought that the shape of bridge was really interesting. The V-shape of the new bridge looks like a bird’s wings and, of course, what seaside town is complete without gulls!

“They are really excited that their name is going to be part of Lowestoft’s history, it is something they can be proud of and tell their children in years to come.”

A panel of representatives from the local councils, local organisations and the town council, led by Peter Aldous MP, unanimously agreed that Gull Wing was an excellent suggestion and agreed that it would become the new bridge’s name.

“We’d like to thank all the children who gave their suggestions. There were some really interesting choices and clearly a lot of thought had gone into them.

“When we all looked at the list, Gull Wing jumped out at us straight away. We were looking for a name with a local context which had some meaning to it, but which would also be snappy and descriptive so people will use it.

“Many congratulations to the pupils from Somerleyton Primary School. When the bridge is open, they will be able to walk and cycle over it, knowing that they gave it its name. And who knows, when they are older, maybe drive their electric car over it too!”

“This is a really welcome moment now that everything has been made official. With our Masterplan ambitions and being able to protect businesses and residents from flooding for 100 years, Lowestoft will be increasingly important to Suffolk and beyond. Giving the bridge its name is a statement of intent for the project and for the future of the town. We are building for our future, so it is entirely appropriate that the bridge has been named by our younger residents.”

The next step is for the project’s final business case to be submitted to the Department for Transport by the end of August. The company chosen to build the bridge will then be announced in September, along with the appointment of a new project director at the council. Funding from the Department of Transport is expected to be available in November, with construction work starting on site in Spring 2021.

For our Campaign Spotlight on the Hartlepool By-Election, meet Jill Mortimer, the Conservative candidate for Member of Parliament in Hartlepool.

[PLEASE NOTE: Images with pupils from Somerleyton Primary school were taken on 5 March 2020, before social distancing measures were in place.]